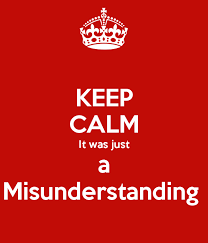 Back in my teenage years, the phrase “You don’t understand me!” was uttered frequently–whether it be out loud or under my breath. Well, let’s be honest, it might have just been my eye-rolling that said to my parents…”you just don’t get me!”

In several recent conversations, I’ve realized that perhaps the root of the pain, frustration, anger–you name it–that employees occasionally feel—comes from being misunderstood. And, typically, when there’s misunderstanding, there’s also a breakdown in communication, unmet expectations–yours, theirs or both–and a general sense of discontent that comes from that feeling of not being known or understood.

Yet, there is opportunity in misunderstanding. I know…a very optimistic way to look at it and shouldn’t the person who is “doing” the misunderstanding, be the one to fix it? How can we fix another person’s inability to “get us”?   Well, you can’t! That’s why it becomes frustrating when we continue to try. In an ideal world, it would be great if everyone else was as enlightened as we are, but since they’re not (and we’re not always the most enlightened if we were to speak the truth), maybe these suggestions will help you create opportunity where you once thought there was only misunderstanding.

Seek to understand (yourself and them)

2 things happen usually when we feel misunderstood. We make it about them or we make it about us. Either way, we internalize what is said or done and we make it mean something–most of the time something negative–about ourselves. So, my boss decides I’m not the right person for the promotion and gloom and doom sets in….the feelings of self-doubt flood us and we’re convinced that we must be inept, a bad leader or have no future…all because of one person’s decision. Or, we make it about them—“my boss is clueless…I can’t believe she doesn’t know I’m the right person for the job”, “he doesn’t want to promote me because I’ll end up making him look bad”. And on and on it goes.

Instead, when you find yourself thinking you know someone’s motivation or you internalize someone else’s behavior to mean something about you, STOP. Stop and think about what’s really happening. Force yourself to come up with a different meaning for the situation. Maybe your boss didn’t offer you the promotion because he’s got something better in mind for you that is a better fit for your skills.   Look inward to understand why your mindset shifts to chastising yourself, beating yourself up or maybe even believing another person’s less than positive point of view about you. Also, seek to understand. What else—something besides you–could be contributing to the perception the other person has? Put yourself in their place…is it possible that maybe they have a lack of information, are having a bad day or something else is going on that’s leading to the disconnect. And more importantly, are you willing to talk to them about it in order to create some common ground? I guarantee that you’ll likely find something that you agree on and that will lessen–maybe not erase it–the misunderstanding.

Those stories I mentioned, the ones you make up in your head when there’s a misunderstanding…you need to STOP those too. Not just stop but squash them. This may take some discipline..much like building a new muscle or habit. When the stories creep in following a misunderstanding, squash them and replace them. While working with people in career transition, one story people create is that “I can’t do something new….no one would hire me”. But, reality is that you’ve likely convinced many people to hire you in your lifetime. Instead of the story that no one will hire you, how about the one where you envision the people out there you’ve yet to meet who are dying to have you as a part of their team–you just have to make sure they get to know you and understand what you can bring that they shouldn’t miss out on.

Create what you want

When you don’t understand someone else or they don’t understand you, chances are that you want something different. Visualize the relationship or the outcome you want, get clear about what’s getting the way (what are the stories you’re telling yourself) and decide at least one thing you can do that will get you closer to what you want. If you can’t come up with what you want out of the relationship, then chances are you should resolve yourself not to be bothered by being misunderstood. Agree to disagree as they say and move on. Dwelling on what you don’t want guarantees that it will become reality. Focusing your energy on what you want instead will bring you closer every time.