Ever had one of those days where you were “busy” from the beginning to the end with one meeting after another?  The agendas that were sent in advance (oh, that’s wishful thinking isn’t it) weren’t clear on what you’d be doing/deciding but instead include a laundry list of topics with vague start and stop times.  You notice your energy level has dropped to dangerously low levels but you think it’s because you had a handful of nuts for lunch since one meeting ran longer than scheduled (surprise!).  As you begin to drift off to sleep, you try to think of one thing you accomplished that day (and attending all the meetings doesn’t count).  You struggle….until you finally give in, fall asleep and get ready to start over the next day.

You’re busy but not productive.  Why?  One reason may be that you’re meeting and not collaborating. 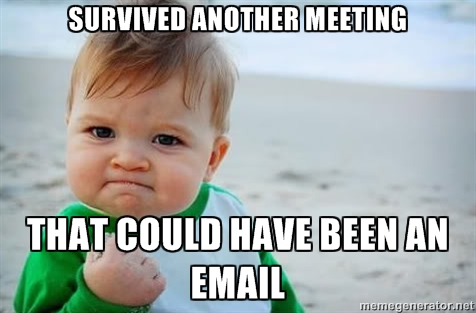 Barbara Gray, in her book, Collaborating: Finding Common Ground for Multiparty Problems defines collaboration as the process through which people who see different aspects of a problem can constructively explore their differences and search for solutions that go beyond their own limited vision of what’s possible.

There are five things that may warn you of a deficit of collaboration in your life:

1.  The word UPDATE appears in the subject line of many of your meetings

Meeting for the purpose of an update implies living in the past versus creating the future.  When we’re giving an update, we’re bringing people up to speed on things we already know or things we’ve already done.

SHIFT: Design your update to also identify an opportunity to seek input on alternatives or best practices from others in the room (zoom or otherwise!)

If you’re not doing a little wondering about what’s possible, you may be limited by the current reality.  Collaboration involves creating.

SHIFT: Ask yourself a “what if” question…”what if I involved another person in this?  Who would it be? What could be gained through collaboration.  Then go find that person!

A sure sign that you’re meeting and not collaborating is when the outcome only benefits one person (or neither person).  Collaboration is a sharing of ideas and thoughts that produces a better outcome than if only one was thinking on their own.

SHIFT: In your next meeting, look for ways to share ideas on something where both people involved benefit from the discussion.  Maybe one gets the benefit of sharing expertise so that the other person can make their idea better.

4.  The outcome is only as good as expected (not better than expected)

We had a meeting to plan an event.  We knew it was a meeting when the resulting event was an exact replica of the event we held the year before.  You know you’re collaborating when you build on the foundation of what’s been done to create something even better.

SHIFT: Look at interactions you had over the last week. Were there any that produced something better than you planned because of effective collaboration?  Yes?  Do that again!

5.  The meeting itself is the only objective versus a means to an end

AKA status meetings, updates (see above), 1:1s, touchbases.  Meetings are not inherently bad.  We need to meet to collaborate.  Your mission…should you choose to accept it…is to turn an ordinary meeting into a collaborative, productive event.  You know, the kind that you can remember what it is you accomplished when you drift off to sleep.

Examine  your schedule and your to do list.  Identify meetings that you can transform into collaborations.  And, what’s on your to do list that would benefit from some collaboration?  Build connections that allow for that.  Invite people in to your sandbox, exchange and share ideas and then step out of the way…because what you will create will no doubt be better than what anyone can do on their own.